Like everyone else, I wish I had more time—there’s too much to do with only 24 hours a day! If graduate school has taught me one thing, it’s the value of time. Yet I spend much of my research time doing low-level tasks, like ordering supplies, preparing samples, and converting files. Life is too short to do these low-level chores over and over again.

Which is why, as a graduate student, I’m very excited for increased automation in science. Unlike, say, customer service, science is an ideal field for automation: removing the human element from science is often an asset! Automation promises higher sample throughput, precision, reproducibility, and analytic rigor; lower cost-per-experiment and human bias; and, importantly, more efficient use of human time.

In this post, I’ll discuss three categories of automation in science: automated data processing & analysis, automated experimentation, and automated everything. I distinguish autonomous science from purely computational approaches like the Materials Project; while these initiatives certainly have a role to play, I’m an experimentalist, so I’m more excited by automating empirical science.

In my field of battery research, Voltaiq specializes in automated data processing. Different battery cyclers (potentiostats) save data in a variety of different spreadsheet formats. The main challenge is that the “units” of interest, single cycles, run together in a spreadsheet format. Separating cycles can be difficult to automate if the electrochemical conditions are changing with each experiment. Voltaiq provides a cloud-based interface to quickly and automatically visualize key figures, saving battery scientists hours per day.

Autonomous data analysis is essentially artificial intelligence, in which a computer makes decisions on data. Of course, AI is widely employed for rapid decision-making in the technology and financial industries today, with spam filtering, online advertising, and high-frequency trading as canonical examples. The role of AI-enabled automation in scientific decision-making was recently profiled by Science magazine (content behind paywall). AI-driven scientific analysis is best suited for optimization problems over a large parameter space, in which knowing the optimum can reveal insight into fundamental mechanisms that underpin the system. However, in the physical sciences, we often just want automated analysis, since the experiments are carefully constructed to test specific hypotheses.

A related field is combinatorial chemistry, or systematic exploration of a synthesis parameter space. ACS Combinatorial Science highlights work in this area. The goal is often to fully populate a parameter space, such as a phase diagram. Combinatorial science is especially well-suited for solution chemistry, as the robotics of liquid handling are relatively simple. For example, the Andrew Alliance has developed a pipetting robot at an accessible price point.

As a graduate student studying batteries, I’m particulary excited by high-throughput experimentation methods in battery science to reduce the “drudgery” of routine lab work, not to mention the throughput and yield advantages. While I enjoyed making coin cells (mini-batteries for research purposes) when I joined the lab, the novelty quickly wore off; now, as I near my 1000th cell, making coin cells is most definitely work—especially when I need 50 identical cells at once.

“Automated everything” is combining the two levels above, and then some. “Automated everything” is more commonly called “closed-loop testing”, since the autonomous system can “close the loop” by automatically generating hypotheses, results, and insight, and then repeating until it reaches a satisfactory answer. Closed-loop testing is best suited for optimization problems over a parameter space, in which the physical apparati and problem structure are well defined. 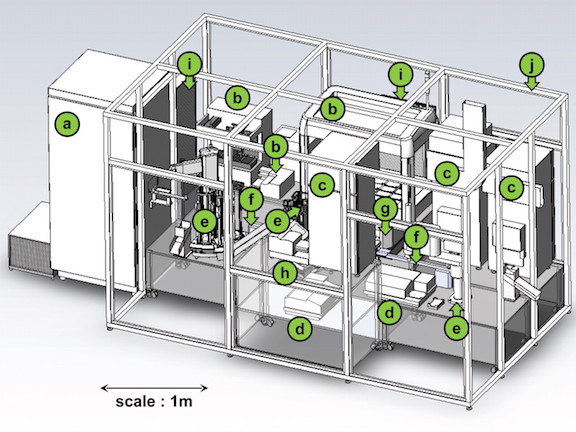 The first reference to a “robot scientist” that I could find is Adam. Published in Nature and Science, Adam optimizes the growth of microbial cell cultures by changing the genotype and environment, a multi-dimensional parameter space. Adam made over 7 million optical density measurements—a feat that would take years to perform manually. The second-generation robot, Eve, innovates over Adam by more efficiently sampling the parameter space.

Zymergen is a startup pursuing automated science for high-throughput biology to improve the productivity of industrial microbes. Zymergen’s CEO describes their results improving microbial strains that are already “highly optimized” in the company’s Science profile:

So far, Hoffman says, Zymergen’s robotic lab has boosted the efficiency of chemical-producing microbes by more than 10%. That increase may not sound like much, but in the $160-billion-per-year sector of the chemical industry that relies on microbial fermentation, a fractional improvement could translate to more money than the entire $7 billion annual budget of the National Science Foundation.

I like the author’s description of the suitability of closed-loop testing for “essentially any complex optimization problem for which improvement is well-defined.”

Closed-loop testing enables a scientific “4th paradigm”, as captured by this quote from Zymergen’s “What we do” page:

We replace the hypothesis-driven method with a systematic test-everything approach that lets the data speak for itself.

This “data-driven” method reminds me of the “Edisonian approach”. For problems with high dimensionality, the data-driven approach may be required when human intuition can neither generate experimental data with reasonable time and cost constraints nor make sense of the problem’s complexity.

To my knowledge, no one has attempted closed-loop testing for optimizing batteries yet…